The Mongolian Revolt Against Aggressive Sinification

On September 1, thousands of Mongols joined a rare boycott against the Communist Party of China’s new school curriculums. They feared the reform would sabotage their ethnic identity. Parents gathered in front of the schools to bring their children home, and as a result, a large number of paramilitary police arrived and formed blockades at school entrances. Students were involuntarily detained in their classrooms by the school authorities.

A parent informed the Associated Press that conflicts escalated between the parents and the guards. “The school gate was blocked off by walls of people. We continued to shout slogans.” He added that the police deployed pepper spray twice against the parents. Finally, the principals and local communist officials allowed the parents to take their children home after 9 pm.

The communist authorities followed their usual response protocol against civil unrests. According to the BBC, on September 2, Tongliao Police offered bounties on hundreds of protestors. These protestors face charges of instigating riots. At the same time, the Communist Party formulated a comprehensive plan to force Mongols back in their classrooms.

The Communist Party required local officials to take any means necessary. Firstly, the student attrition rate was tied to the promotion of local officials. Attendance rates were expected to be above 70%. The one with the lowest attendance would be reprimanded. Secondly, students would be permanently banished from the public school system for failures to return by noon on September 13. Some schools have allegedly offered around $30 to each student who met the deadline. Moreover, Communist police barged into homes at night to take away students by force.

However, Mongols did not concede to threats from the Communist Regime. On September 2, 300 employees of State-run Radio Station signed a joint statement against the communists’ mandate. They claimed it violated the PRC Constitution. Mongols around the World joined forces to protest the revision. On September 12, Mongols assembled in front of the Chinese Embassy in Tokyo to protest. On September 15, demonstrators gathered in Ulaanbaatar to protest Communist Foreign Minister Wang Yi’s official visit. 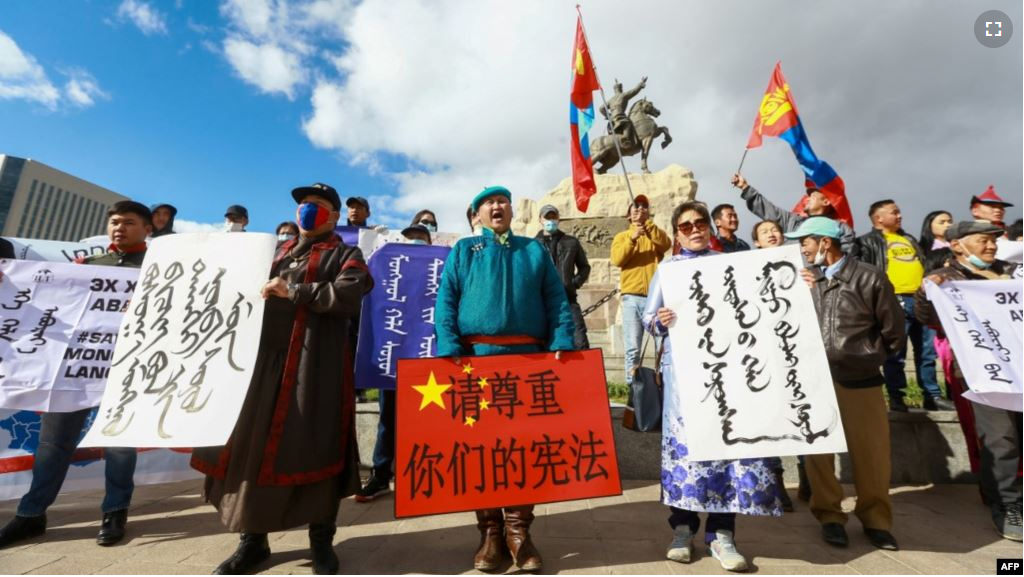 Since the beginning of the Communist ruling 70 years ago, China has emphasized its principle to protect ethnic identities. Mongolian is the second most popular language besides Han languages. It seemed counterproductive for the Communist Party of China to further jeopardize the party’s support base among the minority population.

Communists kept an authoritative power structure since its formation. The party required unification on faith and value systems. In 2010, Communists initiated a campaign in Guangdong province to replace Cantonese shows with Mandarin. Any bondings within local communities present risks to the CCP’s centralized propaganda system.

The Communists also leveraged cultural differences and ultra-nationalism to achieve greater power. In the past few decades, the CCP has drafted a large number of Han people into rural areas to subdue local culture. They believe in Sinification to implement centralized doctrines. Sinification is a process whereby minority societies come under the influence of an engineered Han culture.

The reform of the Mongolian language education system is merely a manifestation of the Sinification principles. The Mongols are a model minority in China. They have embraced Communist indoctrinations and nationalism for decades. Nonetheless, they stayed quiet to the suffrages of Uyghurs and Tibetans. However, Southern Mongolians still share close bonds with their northern counterparts. Their connections jeopardized the communists’ authority.

The fate of these dissidents remains unclear. It is expected that the Communist Regime could brand the protest as an attempt towards “succession”. People should realize they can never run away from the CPC influence by demanding “independence”. The Communist Party of China would continue to weaponize nationalism and enforce Sinification for its dominance. It is time for the World to join force and exorcise communism from China. #TakeDowntheCCP

Gnews.org remains neutral on American politics. It does not endorse either the U.S. Republican or Democratic Party. A Junior Editor on the South. I spent two years in Beijing as an exchange student. Weaponized nationalism in Communist China is the root cause of their systemic racism. #ExorciseCommunism ! Stay updated @DylanK_357 (view is my own) Sep. 21