So, who commissioned such a frenzied poll? Does Sina have the guts to make its own claim? Impossible! Chi Haotian, the former Defense Minister of the Communist Party of China, responded.

In 2005, Chi Haotian gave a special report “War is not far from us. It is the midwife of the Chinese Century” at a high-level meeting in the military. In the beginning, he said: “I am very excited today because we commissioned Sina.com to do a large-scale online questionnaire. The questionnaire shows that our next generation has great hope and there are successors to our party’s cause. When answering the question “Will you shoot women, children, and prisoners of war?”, more than 80% of the people answered affirmatively, far exceeding our expectations.” 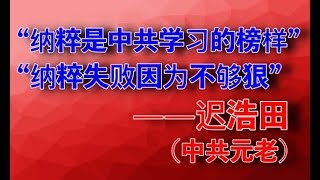 In Chi Haotian’s eyes, all patriotic are leeks and cannon fodder!

Who commissioned Sina to do this survey? “we”! “who are we? Communist Party! Who said it? Chi Haotian, the former Secretary of Defense of the Communist Party! The Communist Party’s internal high-level reports have completely torn off its usual pretense of deceiving the world and stealing names and nakedly investigating the Chinese people’s intention to kill. The purpose of this investigation is very sinister. On the surface, it has three sentences, but the two sentences “if you were a soldier” and “with the permission of your superiors” are just the premise, and the premise is often ignored. In fact, it has achieved its goal, and these two premises also imply the CCP’s rules of war: on the battlefield, all opponents will be killed without mercy, because “superiors allow”! Who is the superior? The superior is the Communist Party that “personally deploys and directs”! Therefore, the real effective content of the questionnaire is the last sentence “Will you shoot at prisoners of war, women, and children”? The Communist Party played the “all the people as soldiers” tactic in the early years, and now it is playing “military-civilian fusion”. The fundamental purpose is to wait for a certain day when the world unites against the Communists. Those “cannon fodder” who are deceived and forced into the battlefield can kill people without blinking their eyes! They know that they do a lot of evil and will not end well!

Why is Chi “excited”? He said there are two reasons:

1) There is great hope for our next generation. There has been no war in twenty years, and more than 80% of people are willing to shoot at innocent people. What does this tell? It shows that the Communist Party’s years of “hate education” have been very successful, and the whole society is too hostile. The so-called “hundred years of humiliation” has taken root in the minds of every generation through textbooks. After 1949, the Communist Party and the Soviet Union were defeated and retreated. The attack on Taiwan was annihilated. The attack on Vietnam was “losing territories and breaking down soldiers.” The “Opium War”, the “Allied Forces of the Eight Powers” and the “Japanese Invasion of China” became the Communist Party’s venting of hatred as well as the “nuclear weapons” for brainwashing the nation. “They beat us back then, and now it’s time for us to beat them. If you want to beat then beat them to death” has become the “heart demon” of many young people. As a result, the Communist Party was overjoyed and “excited.” They don’t have to worry about the young people’s reluctance to fight if they haven’t fought for 20 years. However, is there a second-generation government official and a second-generation rich who participated in the survey? impossible! If they hold important positions either domestic or overseas, they will have “Lamborghini” swaggering on the street. “War” is just a movie they watch or a way to make them safer and more prosperous. Parents are leeks, and children and grandchildren are cannon fodder. This is the fate of the common people, but 80% of the respondents who are willing to kill did not have this consciousness, at least sixteen years ago.

2) There are successors to the cause of our party. Since “our next generation” has great hope, then “the cause of the party” will naturally have successors. No matter where the children and grandchildren of the party are, the red world of the party is always in the hands of the children and grandchildren. The Deputy Prime Minister of the Communist Party of China Chen Yun said long ago: Our party’s state still has to be in the hands of our own children, otherwise, some people will dig the ancestral grave of the Communist Party. Nowadays, in the Internet age, it is easy to let the party know that there are so many young people who are willing to “kill” for the party, and of course they are willing to “dedicate their lives” to the party. Party, can you not get excited? No longer have to worry about falling by the side of the country.

(If you want to know what is going on, please listen to the next breakdown)

The link to the report. In terms of the logic and content of the report, and the nature of the Communist Party, the authenticity exists, but it needs to be verified by authority and follow the principle of “only the truth is not broken”.

【Disclaimer】  While the author endeavors to reveal the truth and keep the information accurate, we make no warranties of any kind, express or implied about the completeness, accuracy, and reliability with respect to the website, the cited information in the articles, or the related graphics.  All views expressed in the “Opinion” section belong to the author and do not represent any organization, committee or other individuals.

不想当跪族，就必须为尊严而战斗；不想当奴隶，就必须为自由来呐喊 Take down the CCP